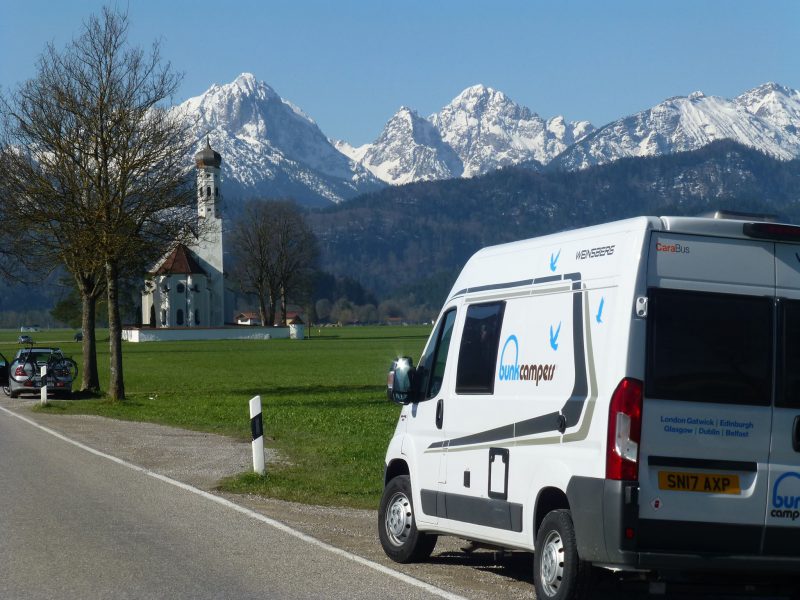 Two middle aged people from Doagh, Co Antrim (N.I.) were looking for an adventure – Bunk campers provided one!
When we booked the motorhome relocation deal, we had no idea what a campervan holiday would be like. Being allocated the start and end points of your journey with the rest up to you, was too much to resist. We signed up and were flown to Munich, courtesy of bunk campers.
With a guide book on Europe under our arm and a demonstration of the essentials of how to manage the camper, we set off. We set the sat nav to Cherbourg as our end destination, looked up the local weather, checked the guide book and pointed the van towards … The Bavarian Alps!

We had to rely on our junior school German and it was surprising what was tucked away in our brain. Trying to buy matches for the gas ring to make a cup of coffee the first night proved interesting. Why do they teach you how to find the library when learning a language in school instead of useful things like “can I buy a box of matches please?”

Every day we found a new delight – Neuschwanstein castle (Disney’s Cinderella castle was inspired by it). The mountains were awesome and the wee camper managed the bendy roads and slushy, snowy with ease. It was always there to have a cuppa in or just sit and admire the view. 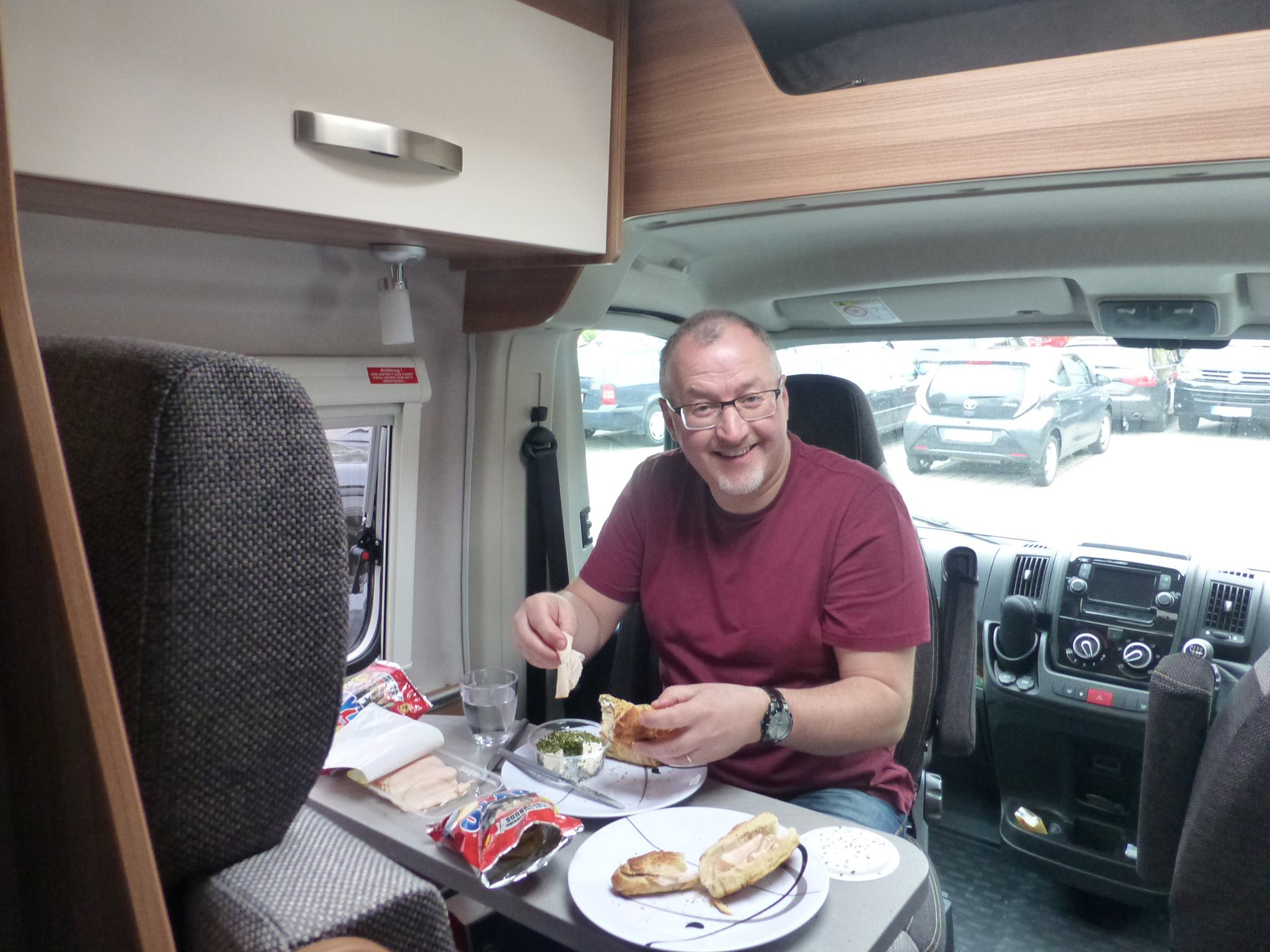 We had to turn northwards so again we looked at the guide book and set off towards Belgium. We had a wonderful evening in Ghent on a fabulous campsite with its own lake and sports facilities. We walked along a canal into the city centre to see the medieval buildings lit up at night and saw the most unusual art installation – real sheep in the Arts faculty garden. Belgian Dutch was a step too far in our European school lexicon (probably, when we were at school Dutch was very exotic). This lack of understanding led to an interesting conundrum – we were looking for Ypres for many miles in Belgium in order to visit the Menin gate and WW1 sites, when we realised it was called Leper in Dutch. We turned off just in time! 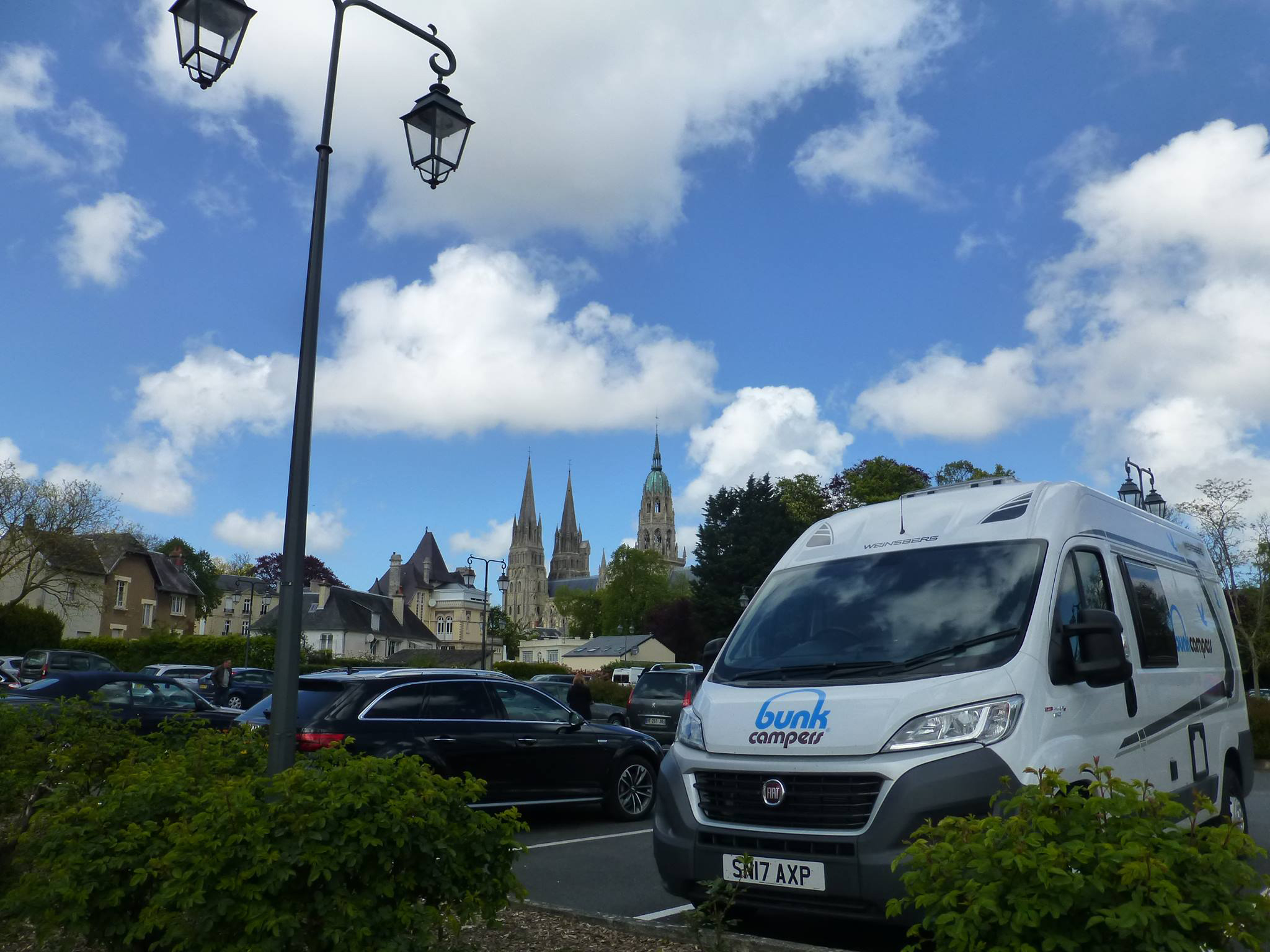 We found some excellent campsites, one of which in Northern France was in a farmer’s field. He spoke no English so, again, we made ourselves understood and paid our €3 for the site and enjoyed the chickens, sheep and geese on the farm and his homemade cidre too. (That’s French by the way for cider).

Our last stop was to pull up in Bayeux to see the famous tapestry and when we began to become aware of Bunk Campervans turning up everywhere. We were on the homeward stretch.

As we gathered to catch the boat back to Ireland (again courtesy of bunk campers), there was a heavy army and police presence at the harbour, all of whom looked on with great interest at the repeating patterns of Bunk campervans being loaded onto the boat. No one was fluent enough to explain in French about our relocation trip.

What an adventure! The campervan was our route to access places we had never thought to visit. The van was compact, cosy and easy to drive, especially in the medieval towns and villages. We enjoyed the opportunity to not get lost as we didn’t really have a set location to reach during the week.

Next year we’ll have another trip, but we’ll brush up on our conversational languages in order to go ‘native’ next time.