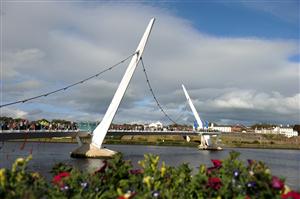 The Lonely Planet has named Londonderry as one of the best cities in the world to visit next year.

The guide puts Derry fourth, behind San Francisco, Amsterdam, and the Indian city of Hyderabad.

A panel of experts based its decision on the city’s calendar of events for its year as the UK’s first City of Culture in 2013.

said Derry was a vibrant city and was undergoing a renaissance.

“When we are putting the bid together we are looking for topicality, reasons to go in a particular year and that was really brought us to Derry. Then you look a bit further and you see what is always fantastic about coming here generally which is the people and how warm and friendly they are. Add in the fast changing cityscape I think you have a good reason to go.”

Derry’s City of Culture year was a major reason for its fourth placing in the Lonely Planet list, but Tom Hall said there were other considerations.

“It’s not just about the specifics of the programme but the focus it brings on the place.”

“There is going to be a really nice buzz about the place, it is a good time to go and experience what is always there, the historic walled city and the Peace Bridge.”

Discover Great Britain! Our England depots are centrally located in the Midlands and at London Heathrow airport.