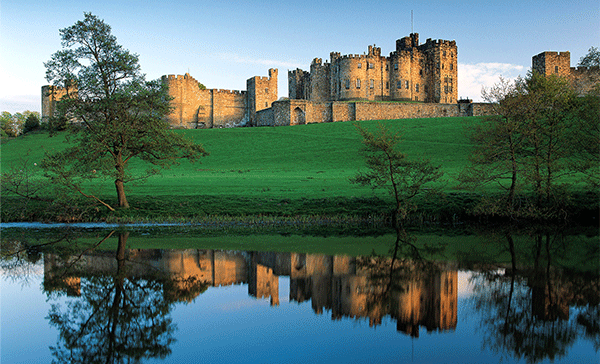 Still nervous about flying to Ireland (or anywhere else)? Looking for a safe escape from life’s craziness? How about a hired campervan trip to your own heavenly spot in the middle of nowhere? James Ruddy reports on doing just that.

“After waddling through the fast-flowing river and turning to look back, I faced a scene that was filled with those green hills and that rugged beauty that could have been my beloved County Mayo.

As the evening sky began to settle into a black cloak of countless pinpricks, the only sounds were the bleating of distant sheep and the bubbling of the River Glen, in which St Paulinus is said to have baptised converts almost 1500 years ago.

Yet, this was a haven far removed geographically – if not mystically – from Ireland’s rugged West. It was Northumberland, in the northeastern corner of England, a place that boasts a lively people, a bucolic landscape and a wild history that could easily drop like a jigsaw piece into an alluring corner of Ireland.

Where better to rest your head in these troubled times than taking advantage of a new idea, Wild with Consent, that allows visitors to rent a stay on private land in some of the county’s most attractive places?

In our hired campervan, my partner and photographer Sue Mountjoy and I spent a few nights in places so quiet, remote and naturally unspoilt that we returned home completely renewed.

With scientists now able to measure the epidemiological benefits of being close to nature, we noticed our stress levels flowing out like two people who had landed on a comfy sofa after a bracing walk up a frosty hill.

After a short stay at three very different sites, our minds were able to wash away the roller-coaster chaos of the months of pandemic misery. Lockdowns, vaccines, masks, virus mutations . . . all were airbrushed over by nights of sparkling waters, hooting owls and crackling campfires.

Indeed, the thinly populated Northumberland has the finest dark skies in Europe, which promise the chance of spotting the aurora borealis (Northern Lights) as well as spine-tingling arrays of stars, which are at their best in the colder autumn and winter atmosphere.

And the days, too, were a similar rest cure amid the empty beaches, bustling market towns, haunted castles and the people who have more blarney than an Irish farmer after a ‘strong’ day at the market.

Like the puffins and the mysterious islands, these Geordies – the name refers to local 19th-century miners – are part of the region’s magic. Revered local author Jack Common put it best when he summarised the subspecies: ‘Geordie goes beyond mere geography and is a quality of heart.’

Our first encounter came as we swung into a car park to pick up our hired Ford Transit Custom Campervan, a 2015 conversion in Alnmouth.

As we waited, a local man, sipping coffee from his flask, was also waiting for a friend. Within two minutes he had told us his life story, extracted ours, and was sharing a spare cup of his warming brew with us, adding as he left: ‘Howay man, get inta Annick. It’s a propa belta.’

And so we did. I parked our motorhome and steered into cobbled and Georgian Alnwick (pronounced Annick by locals), which is worthy of a full day’s visit, with its castle, gardens, and even a museum where you can become a temporary Geordie and crawl through a coal seam.

But short visits require corners to be cut. And so it was that we spent our next few days visiting our highlights, soaking up the local way of life, and savouring the enchantment of those precious star-filled nights.

And so it went. First, we whistled around Alnwick itself, ending up touring the legendary Barter Books, one of the biggest second-hand bookshops in Europe, based in the disused and magnificent Victorian railway station.

With the school summer holidays over, a queue of grey-haired superannuated book lovers waited patiently outside as I pored over plenty of bargains and such rarities as Byways and Queer Ways of Boxing, a 1919 instruction book by Harry Furniss, priced at £146 and David Law’s 1956 Dennis the Menace Annual which was available for a 1950’s house price of £96.

Over the coming days, we toured little Craster fishing village and bought, for a campervan supper, the renowned L. Robson and Sons kippers, claimed by to be the best in Britain (although Loch Fyne might disagree). A heartening whiff of the oak smoke pouring out of the century-old chimney was an added bonus.

There was also a gentle walk up to one of the county’s many ancient hilltop forts and mysteries, the ‘mini Stonhenge’ of the Duddo Five Stones, an Iron Age circle where we met an elderly man who had travelled 60 miles with his bus pass from his Newcastle-upon-Tyne home purely to spend a few hours taking in the views of the Cheviots Hills and the utter solitude (until we turned up, of course).

And that tranquillity is one of the key draws of this land of rolling fields, dotted with stone houses, where calmness oozes out of the very landscape, particularly off-season, in the early autumn.

Of course, there will always be swarms of sightseers at such places as other-worldly Holy Island, where we joined more of those crowds of the superannuated as the statue of Irish Saint  Aidan, blessed us with a stony hand.

At Seahouses, there we met a tsunami of fish and chip crowds, and plenty of elderly gazers were admiring Bamburgh’s beachside castle. But just along the coast at pretty little Beadnell, we found an empty stony beach to flop out and enjoy a deckchair picnic with waves lapping alongside.

And that is the secret of Northumberland, its ability to provide a magnet for the crowd lovers and a peaceful emptiness for the stress-relievers.

Certainly, the latter came with our nights in ‘nowhere land’ – campsites so remote that we used Wild with Consent’s instructions and the What3Words app, which has given every 3-metre square in the world a unique 3-word address and is far more precise than the likes of good old Google maps.

Our first night was at tiny Lanton, through a gate marked ‘PRIVATE’ and along a green track that followed the bank of the clear waters of the River Glen to a rocky beach on a sweeping bend.

Lazy dragonflies fluttered by as the sun sank on a place where battles galore were once fought in the nearby fields, including bloody 15th century meetings of the Scots and the English.

None of that now, of course, (independence issues aside), just our single campervan (only one is allowed each night) and a hearty meal, alongside the river, at one of the scheme’s 14 sites chosen for their beauty, lack of light pollution and noise, and their sense of isolation.

Our next location was another waterside spot, in a tree-lined field alongside the Willow Burn, south of quaint Coldstream and the River Tweed. Again, the only sound was from the buzzards in the woods and an occasional owl hoot as we enjoyed a local road walk and another campervan supper.

Feeling increasingly refreshed, we came to our final night in woods at Greymare Farm, with a fire pit and views across the fields and sea marshes to Holy Island, a haunting castle mirage in the distant mists.

Here, we enjoyed a walk up to St Cuthbert’s Cave, where his bones were interred before being moved to Durham Cathedral, and the primaeval pleasure of that open fire with a glass of Lindisfarne gin to round off another day of modern and ancient magic.

The idea for Wild with Consent came from local campervanner, Grace Fell, who was inspired by wild camping trips in Scotland, where the right to roam allows much freer access than in England and Wales, where overnight stays without a landowner’s permission amount to civil trespass and even a criminal offence, with some councils even imposing £70 fines with early morning patrols.

With campsites getting increasingly expensive, over-regulated and often packed, she was looking for an experience similar to wild camping without the worry of a late-night door knock from an angry farmer or warden.

With the scheme’s stays costing from £25-£100 a night, it’s not free like genuine wild camping, but it provided us with the hassle-free liberation of a few nights of very private and natural bliss.

As a Geordie might say after a stay in such solitude: ‘Wey, aye, man, it’s a Bobby Dazzler of a neet’.”

With depots located across the UK and Ireland, we are perfect for helping you embark on your road trip from our convenient hire locations.

We have a wide range of modern 2 – 6 berth motorhomes and campervans available for you to hire. Booking your motorhome holiday online is easy. Simply visit our website to enter your preferred dates, pick-up, and drop-off locations to obtain pricing. Or you can email us at [email protected]

We will NEVER take bookings or ask for payment via any messaging service. We advise customers to be vigilant with their internet and social media use and if you are unsure of the validity of a quotation, please call or email us. Visit our Book with Confidence section.