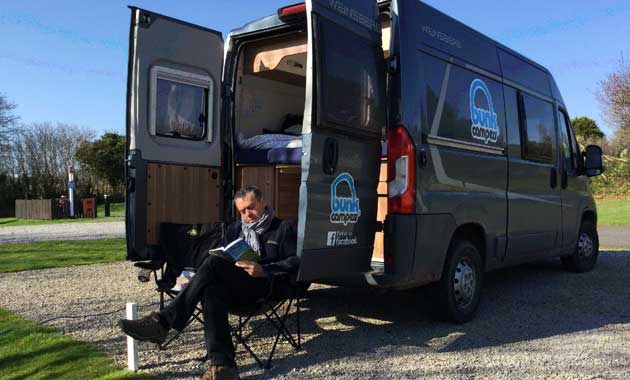 In high summer, as we all know, roads can have periods of endless cars filled with angry drivers and their increasingly frantic passengers sweating through the jams before they reach heavenly beaches. But in spring, autumn or even winter, it’s a different story – the roads into Britain’s most beautiful and most popular coastal region can be as empty as a midnight sky.

No surprise then that I leapt at the chance of a tour of Devon and Cornwall during March, the off-season, when the invading hordes of holidaymakers are still lovingly polishing their mothballed caravans and awaiting the traditional Easter starting flag. So for my partner and Sue and me, it was off to pick up our Aero Camper and journey into the unknown!

Well… we had a rough itinerary sketched onto a torn Sultana Bran box!

Reunited with our Bunk Camper Vinnie

Soaking up the evening sun whilst researching our route.

Amazingly, we were reunited with “Vinnie” (we named him), our beloved Bunk Camper from our Scotland North Coast 500 tour last year. He had been brought down from Bunk’s Edinburgh depot and was waiting for us like an old friend, complete with all the familiar kitchen, toilet, lounge and bedroom mod cons as well as that 2.3 litre engine and 6-speed gearbox that powered us so easily round those Highland hills.

As I punched our first night campsite postcode into Vinnie’s smart GPS, my only nagging concern was that we were heading into a winter zone. Sue, in the shotgun rider’s seat, clearly nursed similar doubts about travelling in low season. She had packed her Moomin thermal Wonsie, three heavy coats, enough woollies and waterproofs to open an outdoor superstore and a Red Cross First Aid Handbook with a well thumbed section on ‘How to Treat a Hypothermia Case.’

We soon discovered such precautions were (mostly) unnecessary..

Blissfully quiet beaches: The benefits of touring in low Season!

Glorious sunny days sometimes burst out when you least expect them.

As any regular off-season expert knows, some of the finest days in the UK and Ireland can be had amid the peace and quiet of a beauty spot in autumn, spring and even on those sometimes heaven-sent sunny days that light up our winters.

And, yes, we did find some closed signs along the coastal tourist towns, but there were still stacks of things to see and do. Indeed, tourist industry chiefs have locked onto the off-season market in a big way. Visit Cornwall positively encourages winter tourism offering such encouragements as ‘awesome storm-watching spots’, wellies as ‘a must-have fashion accessory’ and ‘hot chocolate hangouts’. Not only that, you can find yourself almost alone on one of 300 ‘blissfully quiet’ beaches which become ‘a dog’s playground’ due to seasonal beach bans being lifted.

In low season, lots of your prices are cut, such as parking which is sometimes free (or, at least cheaper than in high season) and you can easily grab that special table at Rick Stein’s, Nathan Outlaw’s or one of the myriad of high-class eateries that are otherwise in massive demand.

Five hours of relatively easy driving  found us hooking up in East Devon for our first night. Putts Corner, at Sidbury, is just inland from elegant Sidmouth as well as the proper working fishing village of Beer, which made for a lovely evening cliff stroll.

Sue (still clutching a glass) and James with their own ‘Ruddy Gin’ bottle at the Salcombe Gin School.

Next day was a real struggle, but only for me. We had arranged the morning at a stunning vineyard with wine tasting (not for the driver) followed by a gin-making class with….er….more tasting (once again, not for the driver). Needless to say, Sue was up earlier than usual and looking keen to hit the road in our camper!

High up in a sweeping bend of the River Dart, three miles from Totnes, lies the 1000-year-old farm which is home to the Sharpham Wine and Cheese centre, which produces English wines as well as a variety of scrumptious unpasteurised handmade cheeses, from the rich and flavoursome milk of 60 Jersey cattle. The centre now produces up to 100,000 bottles of white, rose, red and sparkling wines that have won top titles at UK and international festivals against some of the best in the world.

We had a wonderful guided look round the steep vines that grow in the well-drained red South Devon soil on the Dart’s sun-kissed slopes, after which Sue enjoyed a taste of several of the 14 wines, as well as nibbles of some of the premium cheeses. A spittoon was provided for Sue, but it was noticeably empty at the end, although she appeared to be quite full! I tried the cheeses too before driving us off.

Rolling with The Stones

Unscathed, we made it to the single seafront road of this village where a couple of fishermen still operate and sell their scallops, crabs, lobster and fish straight to the Inn itself for its extensive and acclaimed menu.

The inn is renowned as the first place that the teenage would-be Rolling Stones Mick Jagger and Keith Richards gave their first public show around 1959. Local gossip has it that Keith’s family rented a cottage there and, with his guitar, he and Mick gave an impromptu performance at the Inn – locals being amazed at Keith’s prowess. Despite their starring role, Mick’s slightly less enthusiastic view of the holiday is summed up by his alleged moan: “No girls!”

Sue and I had scallops which tasted ‘straight out of the bay’ followed by a beautifully cooked and presented stone bass, similar to grouper but tastier. That night, acting on the advice of the locals, we slept peacefully on the seafront, as the waves crashed gently on the shingle, alongside a sign that said: No Overnight Camping. Another off-season bonus!

Peaceful days along the Cornish Coast

Peaceful Roseland, down the coast near Truro, is a lesser-visited Cornwall peninsula of gently sloping fields, deserted beaches and traditional Cornish villages. We parked Vinnie at a campsite in Porthscatho and tucked into two huge traditional pasties with a glass of local cider.

Bright morning sunshine again blessed us as we took the stunning National Trust walk along the nearby cliffs to Porthcurnick, where the Hidden Hut (pictured above ) is a gastronomic gem, serving evening feasts including lobster and chips, wood-fired seafood paella and slow-roasted spring lamb. Sue and I settled for warm sausage rolls and huge hunks of fresh cakes, before walking back by the road and getting completely lost (an old lady emerging from her cottage rescued us with directions to the  campervan site).

At this stage our Sultana Bran box itinerary went a bit astray, so we headed up to the north coast for posh Padstow – or Padstein, as some have labelled it in the wake of celebrity cook Rick Stein, who set up his first eaterie there in 1975 and has developed a small gastro empire, as well as a shop and bakery.

Off-season, the place was passably peaceful, as we absorbed the mix of chi-chi galleries and fashion shops – three upmarket pasty shops were competing for business next door to each other – alongside the more traditional places.

Taking a step into local history

Next morning after a huge and locally-sourced Custom House Full Cornish Breakfast we headed up the hill and I did as I was instructed by locals: I walked 12 times round the large flat stone at the churchyard entrance, kissing it at each turn, then placed my ear to it whilst Sue took pictures. Nothing. No sound of hell or the devil. An old couple, walking their frisky terrier, raised their eyebrows as they passed. The dog just raised his ears and looked puzzled. I wondered if it had been an early April Fool ruse, although other locals confirmed that they had also heard of it.  Of course, Cornwall and Devon are packed with such quirky traditions.

Everywhere you go in the south-west it’s hard not to feel that sense of history: the smuggling, the wrecks, the harsh life of fishing and mining. It was there as we drove into the surfing mecca of Porthleven, another quaint harbour village on the Lizard Peninsula, overseen by a 70-foot ancient clock tower which once sported an oil beacon for guiding local boats safely home from its particularly treacherous seas.

One night on the trip, I decided to use all of Vinnie’s culinary equipment to treat Sue to an impromptu four-course extravaganza – from Aldi!

Using two cooking rings, the fridge and just three pans required careful thinking. The result was not only cheap, but tasty and (even though I say so myself) a visual delight.

We forgot to take a photo but the result was joy! (and Sue did the mountain of washing up!)

Lessons from our off season road trip

Maybe off-season people have more time, but we found south-west friendliness everywhere. In Porthleven, first there was the old man in the RNLI cap who guided Vinnie to the free inn car park at the rear. Then a young couple who were leaving and offered us their space. Then there was the inn receptionist – “I’m a Porthlevener, 30 years working here; I just love this job –  who could not do enough for her guests. And then there was the food: scrumptious pulled pork starters followed by the grilled hake catch of the day, as fresh as it was just off the boat.

It’s easy to ignore such off the track places. They are tucked away but fast becoming an open secret in a world of few such gems. It was the home of wartime Dambusters hero, Guy Gibson, and has long been known by surfers for Cornwall’s best reef break. Foodies are now the major invaders with, among others, another Rick Stein restaurant established in a former china clay store and a 30,000-visitor annual food festival in late April.

As we headed back to the Bunk hire base, the roads were pretty quiet and Vinnie was running like a dream.  I reflected on a magical and varied trip on picturesque campsites as well as in the comfort of ancient harbour-side inns. Both were relaxing and memorable in their own way. As Sue snored away in the passenger seat, I headed the camper homeward. One thing was certain: we had had a great time visiting one of the UK’s most beautiful places off-season without the high summer traffic stress.

Book your off season adventure!

With beaches, celebrities, wine tasting & history lessons, the South East England is home to a whole host of wonders all year round. With prices starting from just £55 per day in low season, pick your own Bunk Camper and get your off-season adventure started. To book , simply use our online booking engine, email [email protected] or call +44 (0) 2890 813057. Don’t forget to follow us on Facebook and Instagram to be updated on the latest promotions and travel tips!