Exploring the St Patrick’s Trail in Ireland with campervan hire 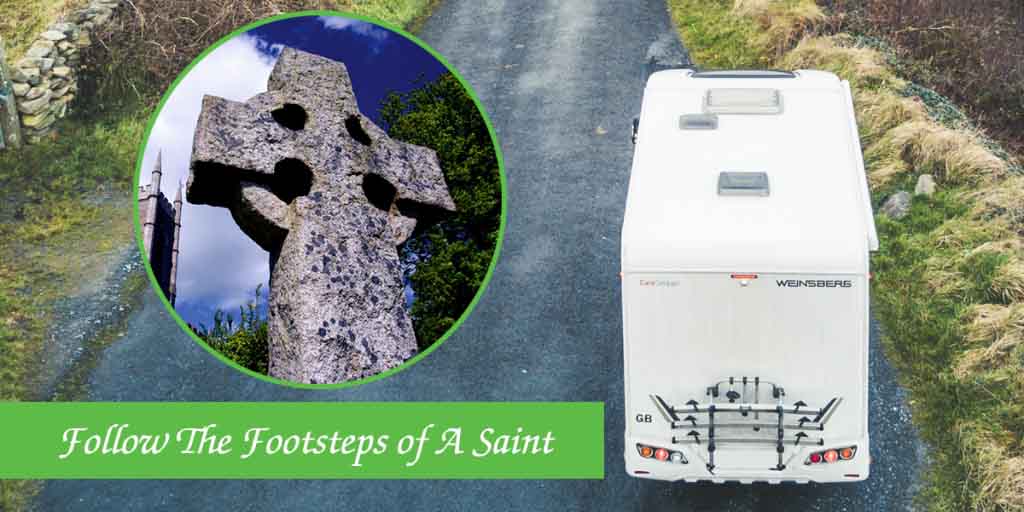 All eyes turn to Ireland in February as the world goes green for St Patrick’s Day. For those ready to take a trip to the Emerald Isle but want to escape the hustle and bustle of Dublin and enjoy a more authentic experience, why not hire a campervan and follow in the footsteps of one of the world’s most beloved saints, while taking in Ireland’s rich Early Christian heritage?

Soaring cathedrals, crumbling monastic ruins and magnificent landscapes, all united by one incredible story. Trace the tale of St Patrick and his intriguing journey from slave to saint, with a trip that explores his legacy across the island.

Campervan hire is a great alternative to car hire and B&B – with your transport and accommodation in one, you can be sure to experience the natural beauty and rugged landscape of St Patrick’s Ireland.

Commemorate the humble foundations of St Patrick’s first church in Northern Ireland, the towering cathedrals named in his honour and the memorial that marks his final resting place. Collect your campervan from Bunk Campers depot in Belfast and get on the open road. For those flying into Dublin, Bunk Campers Dublin depot is located less than 2KM from the airport and the St Patrick’s trail is less than a 2 hour journey north. 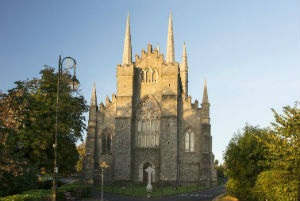 One day one, we’re entering Downpatrick in County Down, where St Patrick first started his mission to spread Christianity. Captured as a slave in Wales and brought to Ireland, young Patrick initially escaped and fled these shores. But after he left, he found himself called back in a dream. Returning to Ireland, he set about his quest to convert pagans by the thousands. So effective was Patrick that one new convert, a local chieftain, donated a barn in which Patrick could hold his services. It was here, just outside Downpatrick, that Patrick lived leading up to his death and on this very spot in 1932, a church called Saul Church was built to honour the site. 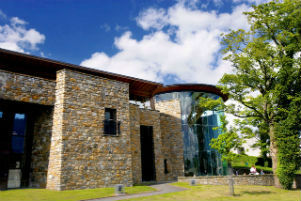 Poignantly, Downpatrick is also where St Patrick is thought to be buried – under a memorial stone, a short walk away from the soaring crenellations of Downpatrick cathedral. Pay your respects to the man who would shape Ireland for years to come, or wander through the corridors of the Saint Patrick Centre, which celebrates his life with interactive exhibits and stories that bring you closer to this extraordinary man. 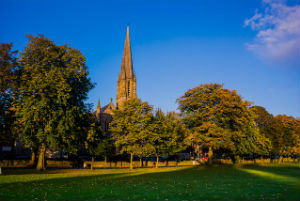 Armagh’s title of ecclesiastical capital of Ireland ensures its importance to Ireland’s Christian heritage. As you walk the narrow streets, keep watch for hidden gargoyles, chimeras and angels that linger in nooks and crannies and peek out over windows. However, the real stars of the city are the twin cathedrals dedicated to St Patrick that sit atop Armagh’s two hills – one Church of Ireland, one Roman Catholic. St Patrick founded his main church here in 445AD on the spot where the Church of Ireland cathedral now stands. Climb to the top of these hills, explore the glorious buildings and marvel at their beauty, and then refuel at Uluru with some well-earned award-winning food.

It’s time for serene landscapes and tranquil lakes as you cross through County Antrim to the glassy waters of Lough Derg, all imprinted with St Patrick’s legacy and legend. 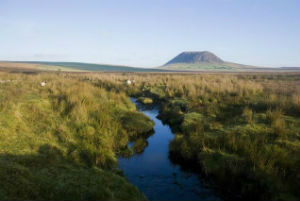 Rising like a behemoth from the gently undulating landscape of County Antrim, Slemish Mountain is where everything began for the teenage Patrick. Brought over as a slave from Wales, Patrick spent six years tending sheep here, and it feels like the landscape has barely changed since. It was on these slopes that Patrick found consolation in prayer, and you can walk the 1.2 mile/2km trail up to the summit of Slemish, and enjoy some of the views that Patrick would have gazed on.

As you leave the mountain behind, stop off in the town of Maghera for a coffee and a scone in the trendy Auction Room. 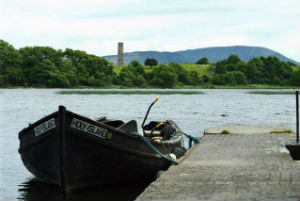 In the middle of Lough Derg in County Donegal, surrounded on all sides by crystalline waters and lapping waves, sits St Patrick’s Purgatory. Named for the cave where St Patrick spent time praying, this island is now a haven for pilgrims from all over the world, and a sanctuary of retreat, reflection and serenity. Two tales permeate these waters. One sees Patrick hunting the last snake in Ireland and turning the lake red with its blood, while the other has Christ revealing the entrance to Hell to Patrick inside a cave.

As St Patrick began to fulfil his mission of bringing Christianity to the masses, our trail takes us around the island, with a pilgrimage to Croagh Patrick, the Rock of Cashel and the Hill of Slane. 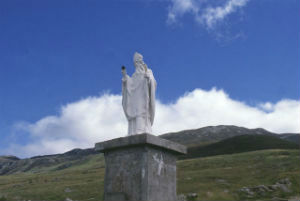 Travel to the west of Ireland, through pretty vales covered with heather and gorse, and towards County Mayo. It is here that you’ll find one of the most revered sites of St Patrick: the holy mountain of Croagh Patrick. With a history of worship dating back over 5,000 years, this is where Patrick chose to complete his Lenten pilgrimage of 40 days and nights. Pilgrims and walkers alike take on the rubble-covered slopes of this mountain, the former often climbing barefoot in order to prove their devotion. It’s a climb of about two hours to the top, but once there you’ll be rewarded with unbelievable views over the heather-covered landscape of the west of Ireland. If a climb doesn’t take your fancy, visit the Croagh Patrick Visitor Centre at the base of the mountain, the Famine Monument nearby, or get to The Tavern in Murrisk to warm your insides with a hearty meal. 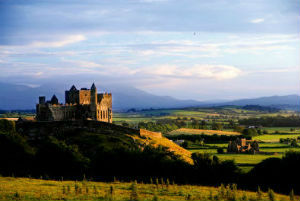 The conversion of a king

Overlooking the gorgeous Tipperary landscape, the Rock of Cashel in Tipperary is a monastic site of incredible significance. Looming over the town of Cashel, this is where Patrick baptised Aenghus, the King of Munster – accidentally stabbing him in the foot with a crozier in the process. The baptism signified the end of paganism, bringing with it an acceptance of Christianity across the land. Amidst the ruins, look out for the 12th century St Patrick’s Cross: one face depicts Christ’s crucifixion, while the other shows an image of a bishop – some say it’s St Patrick himself. 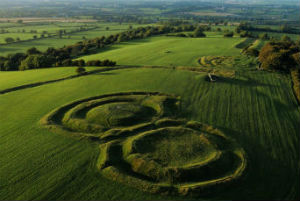 A seat of high kings

Before Patrick’s arrival, Ireland was largely a pagan land. So it’s safe to say he had his work cut out for him on his mission! But he was not deterred. During Bealtaine, the pagan feast celebrating the summer solstice, the high king lit a fire at his seat on the Hill of Tara, County Meath. In defiance, and to celebrate Easter, St Patrick lit his own fire nearby on the Hill of Slane. The king’s guards were immediately ordered to investigate who had started the blaze. Patrick performed one of his many miracles, and cast an illusion over him and his followers to appear as a herd of deer. Making his way to the king’s seat, he made his case to the king. Through his preaching and debating, Patrick converted many of the king’s court to Christianity. Not only that, he impressed the king so much that he allowed him to walk free to continue his mission across Ireland. A short drive away, Brú na Bóinne gives a glimpse in to pre-Christian Ireland, before Patrick’s arrival. Huge passage tombs that predate the pyramids, including the world-famous Newgrange, cover the landscape and feature incredible displays of ancient megalithic art, carved in to the rocks themselves.

If you are looking to get off the beaten track this St Patrick’s Day and experience authentic, traditional Irish culture, campervan hire in Ireland from Bunk Campers is a great alternative to car hire and B&B. Enjoy the freedom and independence to tour Ireland at your leisure – stopping, shopping and cooking along the way.

For more information and booking, simply use the Bunk Campers booking bar here on the website to get live availability for your dates, email [email protected] or call +44 (0) 2890 813057. Don’t forget to follow us on Instagram and Facebook to be updated on the latest promotions, travel routes, destinations and tips!