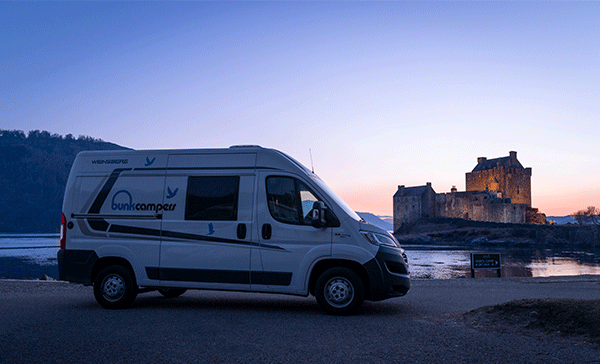 Marked by rugged landscapes, historic castles, jagged coastlines and fascinating cultural highlights, Scotland is the perfect destination to head off on a campervan road trip.

The northernmost country of the UK is where you’ll find some of the best driving routes in Europe, including the iconic North Coast 500 and the new Heart 200 itinerary. And with so much to see and do along the way it’s little wonder that a large portion of the 17 million tourists that visit every year are considering campervan hire in Scotland to make the most of their time here.

Besides the obvious scenic attractions, movie buffs out there love seeking famous Scottish film locations where some of the biggest productions in the world have been shot.

Harry Potter, James Bond and the Marvel Cinematic Universe all feature scenes from the eclectic streets and hills of Scotland.

There are plenty of films and TV shows about the country too – including Braveheart, Trainspotting and Outlander. It’s little wonder that visiting the top filming locations in Scotland is one of the main reasons why so many people hire a motorhome and hit the road with their own cameras in hand.

So where exactly should you include on your Scotland campervan itinerary if you love blockbuster movies? Let’s look at 7 gorgeous film locations in Scotland – and what else they have to offer.

The Scottish capital is known as the home of the largest cultural event in the world – so it’s pretty surprising that it hasn’t featured in many films in the past. Even Trainspotting, which is set in Edinburgh, was largely filmed in Glasgow.

This has all changed over the last few years though. Avengers: Infinity War has a massive fight sequence through the city, and it was also featured in the most recent Fast and Furious instalment.

If you manage to escape the gorgeous city of Edinburgh, just 30 minutes up the road on the way to Linlithgow is Blackness Castle, which served as the exterior of Holyrood Palace in the historical drama Mary Queen of Scots.

It’s a common misconception that Harry Potter was filmed in Edinburgh. The vast majority of locations were shot elsewhere in Scotland – however the books were largely written within the city. Rowling found plenty of inspiration in Edinburgh’s winding streets – including Victoria Street which has parallels with Diagon Alley.

If you’re planning on spending a couple of days in Edinburgh, we recommend staying at the Edinburgh Caravan and Motorhome Club Campsite on the outskirts of town. From there you can head into town to check out all the incredible things there are to see and do around the city.

Wait, so where in Scotland did they film Harry Potter?

The filming locations are dotted around the country but by far the most easily recognisable is the sweeping landscapes around the Glenfinnan Viaduct. This major train connection is where they filmed some of the footage of the Hogwarts Express.

You can actually still enjoy a journey across the bridge to this day. The West Highland Line connects Glasgow with the north of the country – including the stretch between Oban and Mallaig where the viaduct is located. Of course you can’t actually see the bridge when you’re on it so look at the local hiking trails on offer. The Glenfinnan Viaduct Circular Trail is a moderate 3.4km loop which has great views of the bridge and surrounding landscapes.

The West Highlands are also popular with campers – and a great spot to take your campervan hire in Scotland. If you’re planning on camping as close to the Viaduct as possible, check out Linnhe Lochside Holidays, just 15 minutes up the road.

Speaking of the West Highlands – the verdant green hills of the region are home to multiple film locations in Scotland.

Are you a big James Bond fan? Then you have to add Glencoe to your itinerary. This sweeping mountain landscape is instantly recognisable as the location of Bond’s childhood home in Skyfall.

James Bond aside, Glencoe is one of the most popular scenic spots in the country, with the stunning Glen Etive close by. If you can, we recommend heading in the off peak season so you get to enjoy the wistful serenity of the Glen as it was shown in the movie.

When you’re finished snapping your classic Skyfall shots, why not head out on some of the great walks around Glencoe? You’ll find no shortage of them, and best of all you can park your van up at most of the trailheads. Check out the Lost Valley for an excellent short hike.

The nearby Glencoe Camping and Caravanning Club Site is the perfect place to park up your motorhome at night once you’re done exploring all the gorgeous surroundings.

Ok we’ll be honest – most of Braveheart wasn’t actually filmed in Scotland! This comes as a surprise to many people who enjoyed the film, but vast majority of Braveheart was actually shot in nearby Ireland. Not dissimilar to how most of Robert the Bruce was shot in Montana, not Scotland.

That being said there is one location that you might recognise from the movie: Glen Nevis. This is where the funeral scene was shot (hence why there’s a car park named after the film in the area).

Beyond its status as one of the few Scottish filming locations for Braveheart, Glen Nevis is another hugely popular destination in the West Highlands. Ben Nevis is the tallest mountain in Britain and can be seen from pretty much anywhere in the glen. Experienced hikers can head to the top – whilst more novice walkers can still enjoy the riverside scenery.

Stay as local as possible by parking up your campervan at the Glen Nevis Caravan & Camping Park.

Now it’s time for us to head to the East Highlands. Cairngorms National Park is a popular tourist destination thanks to the rolling hills, luscious greenery and thrilling adventure activities. It’s also one of the major filming locations for TV series, Outlander. The popular Starz show has become a tourist magnet in its own right – hence the sudden uptick in visitors to the Cairngorms.

The Cairngorms aren’t the only filming location in Outlander – but it’s likely the only one you’ll actually recognise. Most of the show is filmed in Cumbernauld; a modern town from the 1950s that seems out of place compared to the show itself. There’s a film studio located there and you can sometimes book a tour when there isn’t any filming going on.

The nearby Glenmore Campsite, Aviemore is a fantastic official campground that welcomes campervans and motorhomes.

One place you can’t miss on your epic Scotland campervan road trip itinerary is the lovely city of Inverness, tucked away in the northeast of the country. Not only is it home to castles, galleries and of course the gateway to the North 500, it is also home to Ardverikie Estate, which fans of The Crown will instantly recognise.

Ardverikie Estate set in an impossibly idyllic setting plays as the Queen’s summer palace, Balmoral Castle, in the hit TV series. You can book in for a castle tour or simply wander the grounds, which is a perfect way to stretch your legs after a big day of driving.

Check out the Culloden Moor Caravan Club Site for a fantastic local place to park your motorhome up for the night when in Inverness.

The Isle of Skye has also been featured in multiple film productions. Ridley Scott’s 2012 sci-fi film Prometheus is one of those productions. Popular landmark the Old Man of Storr, simply referred to as the Storr in the movie, is where the ancient star map is discovered. Fans of Prometheus have made Skye a pilgrimage site ever since.

Skye is often chosen for film productions thanks to the jaw-dropping scenery. Snow White and the Huntsman, Stardust and the 2015 version of Macbeth were all filmed on the island. It’s the easiest Scottish island to get to thanks to the Skye Bridge – and like the Cairngorms comes with many hiking, cycling and adventure opportunities. The Cairngorm Upper Mountain Carpark has lots of room for campervans, and is a great place to head out on some day walks.

You will find quite a few spots to stay in your motorhome around the Isle of Skye, including the Skye and Torvaig Caravan & Camp Sites.

Scotland has some truly stunning film locations across the country, and on your campervan hire adventure you’re sure to come across a lot more than what we’ve shared on this list.

Whether you want to roam the Highland hills searching for signs of Monty Python and the Holy Grail, track down Doune Castle for some Outlaw King scenes or pound Glasgow’s city streets to feel like you’re in Wild Rose or Beats, you’ll find a wide variety of productions have been filmed in the nation.

We hope this guide to the most famous film locations in Scotland has helped inspire your plans for your next campervan road trip!

Our Scotland Motorhome Hire Depot is situated between Glasgow and Edinburgh, making it a convenient location for you to pick up your Campervan and begin your onward journey. Choose from our range of 2-6 berth campervans and motorhomes and begin touring these iconic film locations around Scotland until your heart’s content.

We will NEVER take bookings or ask for payment via any messaging service. We advise customers to be vigilant with their internet and social media use and if you are unsure of the validity of a quotation, please call or email us. Visit our Book with Confidence section.