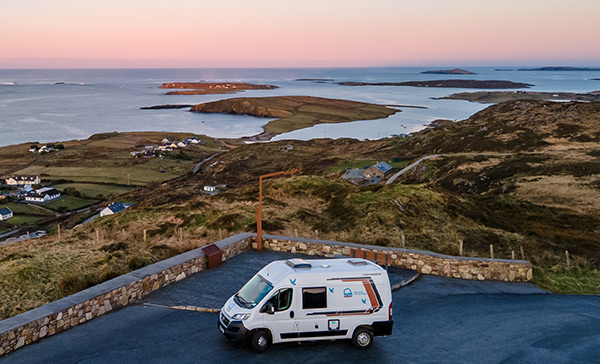 With pandemic restrictions causing continuing chaos for foreign holidays, staycations are booming across the UK. And that means tourist hotspots are beginning to teem with long queues of over-heated visitors.

This is going to be the year when savvy travellers discover countless hidden secrets of our green and pleasant land. And the best way is to do what I have done for the past decade: hit the road in a hired campervan. No trip can be more flexible and stress-free than packing a bag and turning the key on your home on wheels.

As the American astronomer Carl Sagan said: ‘The open road still softly calls, like a nearly forgotten song of childhood.’ How right he was.

So, where can you still find those stress-free hidden places and activities we all crave as ‘a forever memory?’ Well, here’s my guide from the past 10 years of campervanning to some of the ‘Best of British Secrets’ across England and Wales.

A true “hidden gem”, the Lincolnshire Wolds is the only part of otherwise flat Lincolnshire with dramatic hills and valleys, as well as quaint medieval villages and historic and bustling market towns (try Louth, Horncastle and Market Rasen).

There are also plenty of East Coast sandy beaches on the doorstep (try Chapel St Leonards and Sutton-on-Sea), as well as great country walks galore (try the Tennyson Trail in the footsteps of Queen Victoria’s favourite poet).

Packed with historic connections, you will find plenty of museums and sites linked to the area’s Bomber Command bases in World War Two, from the Dambusters at pretty Woodhall Spa, to the fascinating East Kirkby Aviation Heritage Centre, with its own Lancaster bomber.

It’s hard for any of us to have missed seeing a film or a TV serial based on one of Thomas Hardy’s books – at least two dozen have been made.

But there aren’t many people who can claim to have walked in the footsteps of the great Victorian writer, from the places that inspired such wonders as Tess of D’Urbevilles and Far From the Madding Crowd.

That is the ‘hidden secret’ available on ‘The Hardy Trail’ which takes you through his beloved Dorset, one of England’s most unspoilt rural counties. You can tailor your trip to include as much or as little of the walking and sightseeing as you wish – from the Brockhamopton Cottage where he was born to St Michael’s Church, Stinsford, where his heart was buried alongside the coffin of his beloved wife, Emma.

As well as Hardy, Dorset has plenty for the whole family, including drives to the tors of Dartmoor and to the turf bog walks of Lorna Doone Valley, as well as the delights of Roman Exeter.

Why not try the Jurassic Coast too, where you can hunt and remove any fossils you find, as well as the glorious beaches of Woolacombe, Bantham and Croyde Bay and the historic naval sights of Plymouth.

For campsites and stacks of local and Hardy Trail information go to www.visit-dorset.com or www.hardysociety.org

With one of the country’s longest coastlines, thinly populated Norfolk has huge swathes of relatively empty countryside and tranquil North Sea beaches.

Venture to Wells-next-the-Sea and walk along the sands to Holkham and you may well find yourself alone in the dunes, even in high summer, with the waves lapping gently nearby and the occasional tern squawking as it dives to and from the strand. No wonder Annihilation and Shakespeare in Love were filmed there.

Apart from fine and empty beaches, there are stacks of bygone secrets. Try the Deep History Coast, from West Runton to Happisburgh, where a stroll may unearth something surprising – from recent finds, including a 500,000-year-old flint axe to an even older mammoth skeleton and human footprints from 850,000 years ago.

North Norfolk is packed with similar hidden history, old and newer, in and around its brick and flint villages, which have changed little since the young Nelson rode his horse round the Burnhams. You may even come across some of the Royals on one of their visits to Sandringham. They have been spotted in the fish and chip shop queue at Cromer and even in the charity shops at pretty Holt.

For more inspiration go to www.visitnorfolk.co.uk.

Like Dorset and much of Norfolk, Shropshire remains one of those unspoilt hearts of England which still deserves its description by PG Wodehouse as ‘the nearest earthly place to Paradise.’

If walking ancient lanes and paths and across rolling hills among trees that have survived since horse-drawn rectors delivered salvation to the locals, then this is your heavenly place on earth.

But history buffs (children and parents alike) will love the bygone ‘hell’ of Ironbridge where the Industrial Revolution began thanks to pioneering methods of iron-making.  With 10 museums and even the Blists Hill Victorian Town, there is enough ‘hidden’ fun to keep a family occupied for days.

And then you have visits to Ludlow (packed with 500 medieval and Tudor-style buildings) as well as ancient villages like Craven Arms, Church Stretton and Much Wenlock, which are a stroller’s delight.

For further information, go to www.visitshropshire.co.uk

The middle of Wales has long found itself ignored by mass tourism attracted, instead, to the hugely promoted national parks of Snowdonia and the Brecon Beacons, despite having equally fascinating features.

Off-season it’s a ‘Green Desert’ – as Victorian writers once described it – a quiet region filled with the gentle welcome of people bypassed by the brutality of the Industrial Revolution and little bothered by the worst effects of our digital age.

From its wood-fringed lakes and high valleys to its rugged coast and white sand beaches, its landscapes are enough of a magnet to draw in the summer crowds from surrounding Liverpool, Birmingham and Bristol.

But, even then, drive inland a few miles and you will find lesser visited places, like Montgomery, claimed by Lonely Planet to be ‘one of the prettiest small towns in the ‘country’ and Powis Castle, where hidden secrets can be gleaned by a guide to its ancient paintings.

Up at Lake Vyrnwy you will wonder at the hidden village of LLanwddyn, far below in its dark waters, drowned in 1880 to create a water supply for Liverpool. And over at Machynlleth, you can stand on a hill and watch NATO jets passing below, doing the so-called ‘Mach Loop’ training at high speed.

For stacks of information about Mid-Wales go to www.visitmidwales.co.uk/destination/

Choose from our wide range of 2-6 berth campervans and motorhomes for hire and begin to discover these unmissable hidden spots that the UK has to offer.